Chief George Spring Buffalo of the Pocasset Tribe of the Pokanoket Nation (“Tribe”) announced today that the Tribe has entered into an Agreement with Twin River-Tiverton LLC to settle all matters relating to the development of the casino on lands of historical and cultural significance to the Pocasset Tribe. 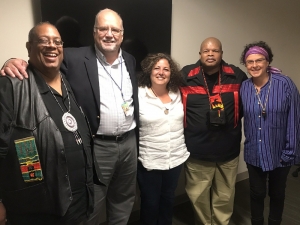 “We are excited to work together with Twin River-Tiverton in respect of the cultural and historical connection of this casino land to the Pocasset ancestors of the Tribe” said Chief Spring Buffalo. “The Casino is built on lands that were granted by the colonial government as the first Indian reservation in the United States, and near the site of an important battle in the King Philip War” Spring Buffalo added, “and this agreement respects the cultural significance of these lands, and the historical importance of the Pocasset Tribe. I want to thank Chief Duane Yellow Feather Shepard and Chief Daryl Black Eagle Jamieson and the support of the Tribal Council.”

Members of the present day Pocasset Tribe are the direct descendants of the Royal Family of the Pokanoket Nation, including Massasoit (also known as “Ousamequin”), the Sachem of the Pokanoket Nation who led his nation when the Pilgrims arrived in Plymouth, Massachusetts. Massasoit entered into a treaty with the Pilgrims in 1621 assuring the peaceful coexistence of the colonists and the Indians. Massasoit’s territory extended from the eastern tip of Cape Cod through southeastern Massachusetts and Rhode Island to the Connecticut River, and north to the Charles River. The Pocasset Tribe has never left its land and retained unbroken existence as a sovereign nation. The Pocasset Tribe has been recognized as the direct descendants of the original beneficiaries and heirs to certain lands in Fall River and Tiverton, and can prove so through well-documented history. There was a large and prosperous village of Indians throughout Tiverton, which previously was named ‘Pocasset’.

“Our history in Rhode Island is long and respected,” said Chief Spring Buffalo. “The Tribe itself has been a significant factor in the history of the formation of our country. There have been many books written about the Pocassets and its woman chief, Weetamoe, and all of the happenings surrounding the King Philips War, and our intent is to ensure that our culture and heritage shall be maintained in perpetuity.” Spring Buffalo added, “it is not our intent to kick anyone off their land where they live and work . . . we are asking that the governments correct the past injustices which they allowed to happen.”